Customer of the Month- Suds & Soda 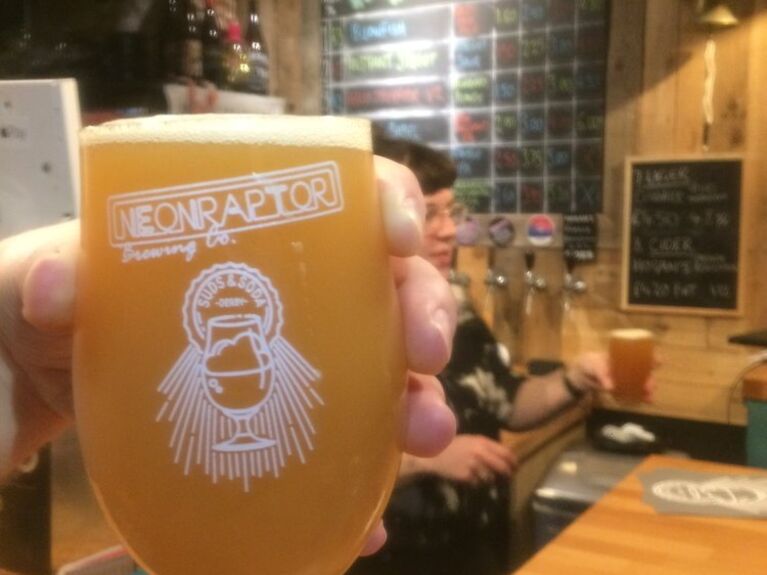 Well hello March, we got off to a frosty start but I'm glad you're warming up! It's time for a new customer of the month, I got the delightful pleasure of getting to visit Suds & Soda in Derby on the eve of their relaunch of their other project: Neon Raptor

Suds & Soda is a bar set up by two former postmen; Tom Ainsley and Josh Mellor. After doing their rounds the two of them use to hang out and drink beer together, they both realised there was a gap in the market for a craft beer bar in Derby and the two have banded together and created Suds & Soda which opened up in 2016. The bar can be found on Friar Gate and is a fusion of bar tap room and  bottle shop. They have shelves full of bottles and cans from all over the world. They also have a fridge, seven beer taps and one cider tap. Hogan's Wild Elder and French Revelation have a regular home here; 'The lower ABV cider is well loved here and we get quite a few people drinking pints of it'.

Derby is well known for its more traditional/mainstream styles of beer. As I pulled into Derby train station I saw the huge Molson Coors factory dominating the landscape. I asked Josh how Derby has responded to their craft beer bar, he told me that it was well received but not without its hurdles. He said it was all about education and he is working with the local CAMRA members to promote awareness about KeyKeg beers. Suds & Soda have a loyal customer base and it's easy to see why, the bar denotes a welcoming atmosphere with some wonderful and knowledgable staff to help find you the perfect drink.

As well as running Suds & Soda, the guys are also organising Derby Beer Con. The event is on the 21st - 22nd of September and they currently have a line up that includes Verdant, Thornbridge, Tiny Rebel, Neon Raptor, Twisted Barrel etc. Hogan's will be representing the cider needs! So keep your eyes peeled for this event which will be held in the Bustler Street Food Market! Crafty drinks and street food, what more can you want? Tickets for this event should be available soon.

The night I visited Suds & Soda there was a Tap Takeover dedicated to the relaunch of Neon Raptor. The board contained six of their beers, from a 4.3% hazy pale ale called Blowfish to a 9.2% Turkish Delight, mint chocolate imperial stout called Never Forget Your Amethyst, which blew my mind. The beautiful smell of rose water with a delicate hint of mint shows that these guys aren't playing around and I for one believe they're going to make huge waves in the craft beer community. Tom and Josh have been splitting their time between the bar and the brewery which will be opening soon, with a tap room in Snienton Market, Nottingham.

If you're ever in Derby I recommend a visit, you won't be disappointed.... and it's very much worth keeping an eye on the developments of Neon Raptor.