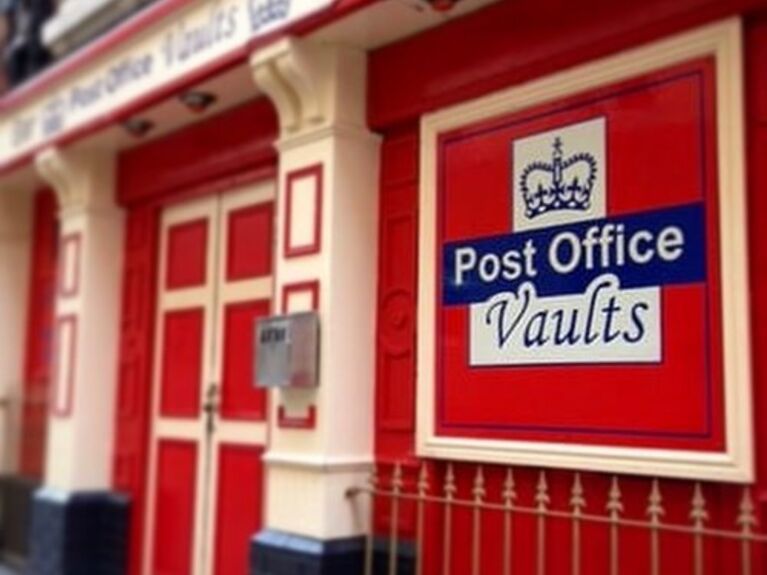 Yes, we missed out a June customer of the month but I thought I would make up for that by having two this month and this one is rather close to my heart.

The Post Office Vaults was conceived and forced into life by Mike Perkins in December 2011 just in time for the dreaded German Market. It started with a modest range of 120 beers that has now grown to 360+ (and believe me for a place with a cellar you can barely stand up in, that's no mean feat!). I started here in 2014 and this month marked my 4 year anniversary since starting.

Why are they customer of the month? When I first started the Post Office Vaults was the only place in Birmingham that had such an extensive cider range. 13 Bag-in-Box, 5 different bottled cider and one draught cider.... Hogan's Cider. Year after year the Post Office Vaults have won numerous CAMRA awards for our cider selection.

It's never a dull day in the Post Office Vaults, as I mentioned earlier I have been there 4 years and each day brought something new and... interesting. Whether this would be a new beer/cider or meeting people all over the world who came specially to see us or just having the oddest conversation with a man who believed he could hold back the power of the sun... with Pears... (he later brought me a pack of them...) or even the day I became a page 3 girl for the Birmingham Mail (my dad has never been so proud)

It was through the Post Office Vaults that I struck up a friendship with Jane Hogan. She use to ring the pub on a Monday morning and we would natter for a good 30 minutes sometimes. She told me about Milo getting old, Allen's adventure to Italy and the ever expanding cider range. I remember at the Post Office Vaults when we received the first ever version of Elderflower Power (now Wild Elder). After a brief stint in Asia I returned to the Post Office Vaults and Hogan's asked me to join their team.

The staff are some of the loveliest, maddest, friendliest bunch of oddballs you could ever meet and they will take the time out to help find you the perfect beverage. So if you're ever in Birmingham and you're near the New Street train station then wander up a little side street and you'll find this hidden gem.